If you decide to switch brands or stages, you'll want to keep a couple of factors in mind.

If you decide you want to change your baby’s formula milk to a different brand or stage (e.g. from infant to follow-on milk), or even if your current brand launches a new formulation, there are a couple of things to bear in mind.

You'll also want to consider your baby's age. If you've already started weaning, the transition from one formula to another can be quite quick. Try changing one feed on day one, followed by two feeds on day two, and so on until all feeds have been changed to the new formula.

If your baby is still only having milk, the transition may take a little longer. To start with, switch just one feed on both days one and two, and then switch two feeds on days three and four, and so on.

If you are changing to a different brand, instead of just a different stage of formula, you may want to swap as slowly as one feed every 2-3 days to allow your baby time to adjust to the new formulation.

We say no to chemicals and only ever use natural pest control like owls and bats.

Our grass-fed cows roam free on our pesticide and GM-free organic farms. 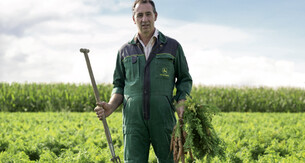